Kids should train martial arts for a lot of reasons, like fitness, fun and self-development. But remember that the core purpose of martial arts is self-defence.

At Chave de Ouro Canberra, we specialize in self-defence. We teach kids, teens and adults Brazilian Jiu-Jitsu, a grappling martial art that’s exploded in popularity over the last two decades.

Brazilian Jiu-Jitsu (BJJ) is a self-defence system particularly suited to children for several reasons. It’s designed to be used against bigger enemies, for instance, and it allows kids to defend themselves against bullies without injuring anyone.

But if your idea of martial arts is Kung Fu, Taekwondo or boxing, you may understandably be confused about what Jiu-Jitsu even is. 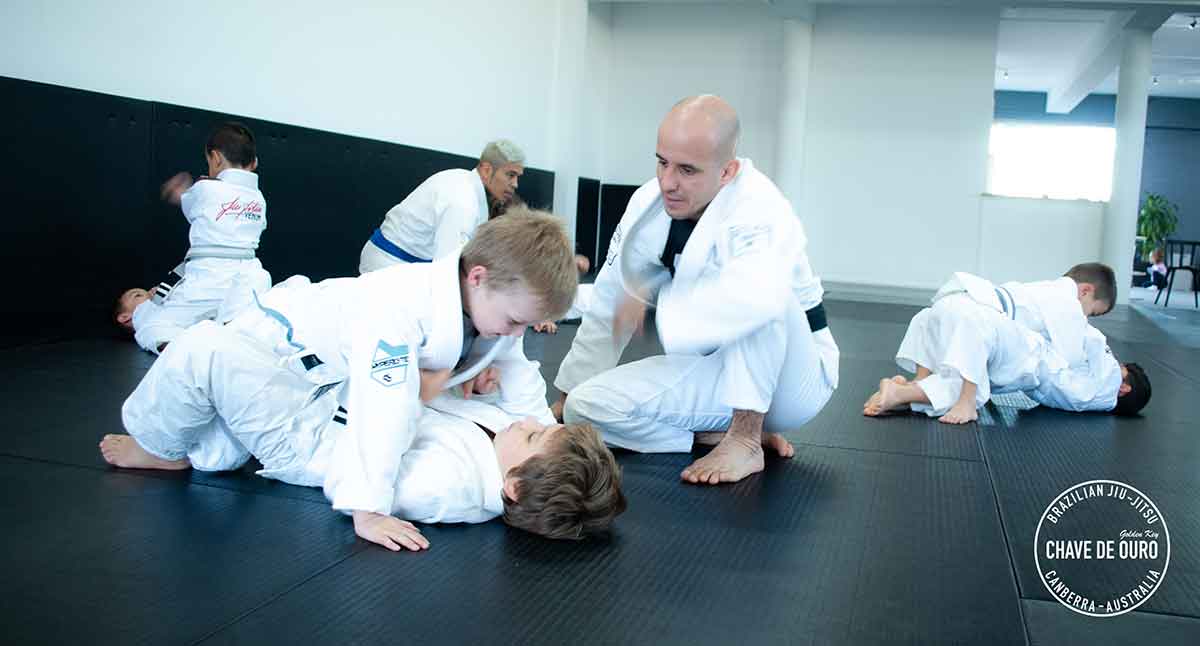 The first thing to know about Jiu-Jitsu is that it’s a self-defence system entirely based around grappling, not striking. Kids will learn how to defend and counter strikes, but they won’t learn how to perform strike themselves.

This is the fundamental way in which BJJ differs from other well-known martial arts, most of which revolve around strikes. Boxing is all punching, Taekwondo focuses on powerful kicks, Muay Thai is kickboxing with elbows and knee strikes thrown in, and so on.

Meanwhile, Jiu-Jitsu is more like Judo. In fact, it was born out of Judo. Four brothers in Brazil were taught Judo by a Japanese expert in the early 1900s, and modified those learnings into a separate martial art: Brazilian Jiu-Jitsu.

But while there are similarities, BJJ is a very different system to Judo. This is because Judo focuses on stand-up grappling, where combatants seek to slam their opponent to the ground. Meanwhile, Jiu-Jitsu is all about ground-based grappling.

This isn’t by accident. The four Brazillian brothers who created BJJ took Judo concepts and adapted them so that they could be effective against larger opponents. Ground-based self-defence achieves this, as big and strong athletes have their power neutralized by being off their feet. It’s harder to generate force on the ground than it is standing up.

The four brothers who were taught Judo were Helio, Carlos, Oswaldo and Gastão Jr Gracie. This is why Brazilian Jiu-Jitsu is often called Gracie Jiu Jitsu.

Helio and Carlos Gracie are by far the most influential of the brothers in promulgating BJJ. A portrait of Helio Gracie hangs on the wall of most Jiu-Jitsu academies around the world.

This quote from Grand Master Helio explains the core idea of Jiu-Jitsu: “Always assume that your opponent is going to be bigger, stronger and faster than you; so that you learn to rely on technique, timing and leverage rather than brute strength.”

As you might imagine, this philosophy lends itself to self-defense for kids. It helps children defend themselves against bullies who may be bigger or stronger.

There are several layers to Jiu-Jitsu self-defence.

First is that training martial arts tends to make kids more confident, and bullies tend to not pick fights with confident kids. Second, children learn how to keep distance from an aggressor, breaking away from any grip or hold a bully might try to secure. Then there is subduing, as most Jiu-Jitsu techniques revolve around achieving a dominant position on top of your opponent, which puts you out of harm’s way.

Finally, in extreme circumstances, there are submission holds that will repel aggressors by force.

These layers of self-defence are another feature of Jiu-Jitsu that sets it apart from other martial arts. Karate, boxing, Taekwondo and other striking arts do teach self-defence techniques, but these are often highly hazardous.

In Taekwondo, for instance, practitioners learn how to perform devastating spinning kicks. Such an attack is not warranted for many altercations with bullies. Distance or subduing are always preferred, since they allow neither party to get injured, with attacks being a last option.

Beyond the self-defence benefits, Brazilian Jiu-Jitsu is a fantastic way to keep children active, and a way to open them up to a whole new network of potential friends. Though there are exceptions, we advise that BJJ is best for children no earlier than 5 years old. The safety and comfort of kids is our priority.

If you’re in Canberra and interested in signing your kid up for martial arts classes, come into Chave de Ouro for a free trial class.