If you’re on this page, you’re probably a parent in Canberra who’s considering signing their kid up to martial arts. Call us biased, but we think this is a fantastic idea!

The obvious reason to sign your son or daughter up to a martial art like Brazilian Jiu-Jitsu (BJJ) is health and fitness. Many parents want to encourage a healthy lifestyle for their children, and martial arts is a great way to do that.

But it’s only the beginning of the benefits your child would reap from beginning martial arts. This is especially true if they begin at a young age. 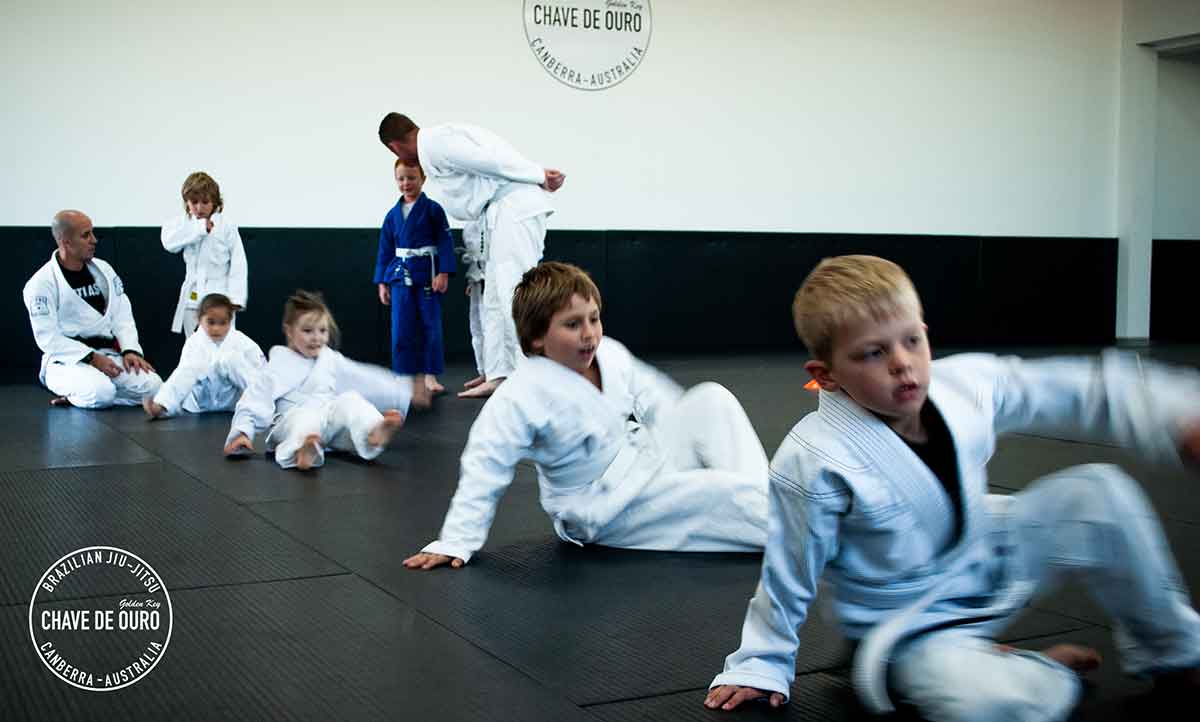 What do we teach

Before we continue, a quick explanation may be in order. Chave de Ouro Canberra is a Brazilian Jiu-Jitsu school. If you’re a parent who never took an interest in martial arts yourself, you’re probably unaware of what BJJ even is.

No problem! The short version is that BJJ is a self-defence system that revolves around grappling on the ground. The first thing to note is that it does not involve striking. Since we’re primarily about self-defence, we do teach our students how to defend against punches, kicks and other strikes, but not how to perform them as attacks.

You may be wondering why. The foundational principle of Brazilian Jiu-Jitsu is that it should work against bigger, stronger opponents. Many striking-based self-defence systems are effective, but often give insurmountable advantages to the bigger fighter.

By taking things to the ground and focusing on grappling techniques, it makes it much easier for smaller people to defend themselves against a bigger aggressor. That’s why BJJ is routinely cited as one of the very best styles of self-defence.

Martial arts are good for everyone

So martial arts in general and BJJ in particular are great for health and self-defence, but what else? Kids have a wide range of hobbies they can explore — here’s why we think martial arts is the best option.

Perseverance: Though there are many physical benefits to BJJ training, arguably the most valuable aspect is how it fortifies perseverance.

Martial arts are satisfying, but rarely easy. This is true of Jiu-Jitsu, which is complicated. It’s a challenging activity, and one that tests emotional endurance just as much as physical endurance. There are times in every long-term BJJ practitioner’s life when they want to give the hobby up, worry they’re not good enough or think it may be too hard.

Overcoming this hardship builds a skill that’s valuable in every aspect of life. As they say, nothing worth having comes easy. The earlier kids can learn this truth, the better equipped they’ll be for future difficulties.

Goal setting: This is related. There is a difference between a dream and a goal. A dream is something you hope may happen to you; a goal is something you plan to happen, and which you work towards.

As noted above, martial arts aren’t easy. Achieving any level of mastery requires not just effort, but conscious effort. Kids will have to plan ahead for success — another skill that will serve them well off the mats.

Discipline: Setting goals is one half of the struggle, working to achieve them is the other. Improving in martial arts like Jiu-Jitsu takes not only recognition of what’s required (goal setting), but also the discipline to put that work in.

The upside to this is that improvement in martial arts is easy to see and feel. If your kids trains BJJ, he or she will be able to perform techniques one day that they couldn’t before. This takes work — but it also shows kids that work pays off.

Respect: To be successful in martial arts requires deference and belief in your coach. Just like it’s important that kids see that hard work pays off, it’s valuable for them to see that they can improve faster if they can put their trust in a leader.

Martial arts also teaches respect for traditions: Be on time, be hygienic, treat not just the coach but fellow training partners courteously. Again, these are things kids can learn on the mats and apply outside them.

Coordination: There’s a saying in BJJ. “The best time to start was 10 years ago. The second best time is now.”

This is true for many reasons. No matter their age, people often get addicted to BJJ after starting and wish they had done so earlier. But it’s also true that adults who sign up in their 30s or even 20s wish they had begun as a kid.

Kids who grow up doing martial arts learn coordination and balance in ways that are impossible to replicate as an adult beginner. Someone who grows up doing BJJ will have the movements and rhythms built into them, giving them a huge adult as the years go on.

If you’re interested in signing your child up to martial arts, come into Chave de Ouro for a free BJJ lesson.